After reading another rejection letter today
I stumbled on this and it made me laugh at myself...
I hope you all have a wonderful weekend, hiding from Father's day or celebrating yourselves! Hope is a new word to embrace

Rejections are part of being an artist.
I know I have mentioned this before, but today I got another one
and it seems to be a year of just being rejected.
Everything I have applied for, to date, has been rejected.

I know it is not " a reflection on my work"  but instead
" There were so many beautiful, accomplished and uniquely creative photographs. Unfortunately your work was not chosen for the exhibition, but it was a pleasure to view your work, your accomplishments as a photographer and your dedication to the process of being an artist."
blah blah blah

I didn't use the word hope for almost a year. I didn't type it, write or say it.
It was a sacred word for so long when we were trying to become parents. I was afraid to use the word casually, or on a whim...like saying the name of a demon or stepping on a crack in the cement.
As I have started this process of stepping back from my lost dream, I have started to use it again as an empowering word again. I am not afraid to hope for things,
I am just a bit cautiously optimistic in the 8 year wake of IF pain.

My art has given me a platform to try and use it again...

Every check I write to a gallery to view my work for consideration,
every hour of research I do on the juror,
every image I review for compatibility for the shows theme or concept;
I pin hope on that last stroke of the key when submitting.

I know that I have tossed caution/fate into the wind.
Art is subjective and curators/judges often have a vision of the show
before even seeing any of the work.
I try to forget about the submission until the week they are due to announce the results.

Even after all these years and all the rejections
It still feels like a kick in the heart when the generic letter arrives
I get sad
I get mad
I get unsure of my self and my work
I wonder if I am on the right path, the right road or
in the right state of mind.

Somehow, I seem to always pull myself up by my bootstraps
and write another check for chance,
for HOPE.
I just keep working towards/for my dream of supporting The Barren and making him a kept man,
and having someone love my work as much as I think it is worth being loved.

How Do You Calculate Your

Contentment as an Artist? 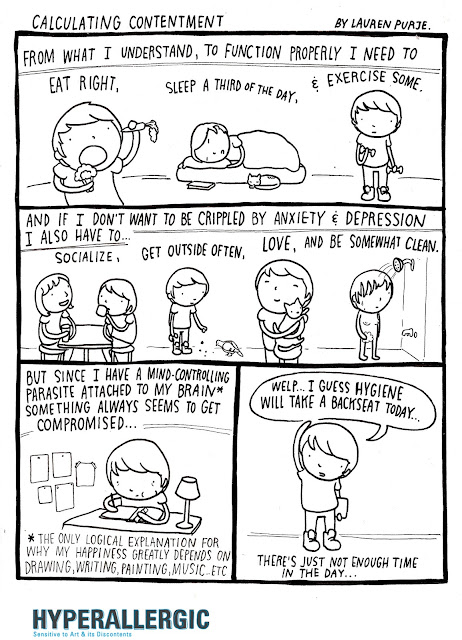 I throw my hands in the air

I love my parents.
I am close with them and thankful that they are here.
But sometimes...I don't like what they do
How they make me feel and that more often these days I think about how they will not be here forever.


I got a call from my mother at work this morning:
"Hi I am at the ER with our father. He had me take him here because he couldn't catch his breath"
I asked if I could come and sit with her while she waited with him for test results.
She said yes, so I packed up and left.

I met her in the waiting room and then we went into the bay my father was resting in.
They were waiting on the results of a CT scan to see if he had a blood clot in his lungs.
He was whacked out on Ativan and quite comfy and mellow.

He drives a lot for his job. Often sitting most of the day.
So checking for a blood clot made sense.
He has had a portion of his spine surgically fused due to deterioration and sometimes he swims...but for the most part my father likes to sit, eat really processed food,
and not do much else if given the opportunity.
He has never been an exerciser, and thanks to pharmaceuticals, he can eat what he wants,
as the medicines do the hard work for him.

I sat and kept my mother company while he slept, the doctor finally came in with the results and said:
we did two EKG's and they are clear
We did blood work that looked for clots in your legs, and that is clear
We did a CT scan and that is clear of clots too
You didn't have a heart attack
so all tests look normal and clear
I think you might have had a panic attack, and I am prescribing a limited amount of pills for you to use when you feel the same symptoms again.
I do recommend that you don't drive long distances alone for the next few days
and I recommend a stress test to make sure all is clear and we have looked at everything.
I want you to run on a tread mill
( I saw my father go from happy to mad)
I asked the doctor if my father was clear to drive as a passenger this weekend for a work related event in a town three hours away, he said
" Um, he is probably fine, but I would wait until the stress test results come in
to do anything like that"
My mother was on the phone right away to the doctors office to schedule the test...
My father looked mad,
I asked him what was going on, what you thinking about:
"I don't want to run"
I smiled and said, " well, that is not an option now"

I picked up the anti-freak out meds, while my mother took him home.
When I met them there, he was acting like nothing had just happened.
My mother was making french toast for him and he was looking at the bottle of pills.
I told him that they were for easing the same symptoms he had before,
not to be taken for recreational use.
He said he was fine now.
I told him, you can't just shove it off, it was serious enough a moment ago, and that just doesn't go away. You need to take the doctors order seriously.
He said that they were still going on the business weekend away trip. I told him again what the doctor said and he said he was going.

I ate lunch with them (as they ate breakfast) and I said goodbye
I had said what I could, repeated doctors orders
and he probably will be fine if my mother drives...but FUCK
why do the rules not apply to him?!
I drove home and passed out/crashed on the bed for an hour
I still think I have PTSD from when my mother went into the hospital
I canceled plans for tonight and instead am watching TV and working this whole thing out here.

I have to walk away for my own mental health.
I have to realize that he is going to do whatever he damn well pleases and if (heaven forbid) something goes wrong he will blame someone or something other than himself.
I have to understand, I can not make everything OK all the time