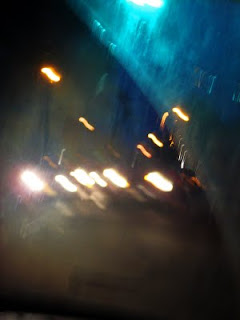 "I couldn't tell what was rain and what were tears"
I told my parents about our miscarriage today, I told them before I realized what words were falling out of my mouth. It surprised me and I could see the wind being knocked out of them.

My mother in her "way" told me that she thought I was pregnant and that she and my father were waiting for me to tell them.
She cried when I told her that it was gone, confirmed and gone. My father was silent and could not look at me for a long while. I don't think he knew what to say...or how to say what he wanted to say.

I told them I am racing the clock on the growing fibroids and that this was checkered flag...the last loss I could endure.
Ironically, my husband told someone today too, the first person he has shared it with and when I asked how he felt about sharing it he said "it made me really really sad, but I just told him..."
this is a really big thing for him...In someways I am very proud of him in others I am familiar with what he means and is possibly feeling.
Now I just have to fight feelings of imagining what it would have been and what it would have looked like and what we would have named it.
Posted by The B at 8:57 PM No comments: Links to this post