Ghosts of days past 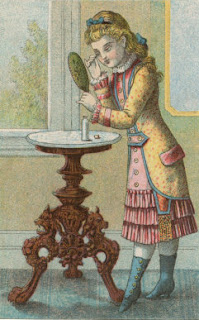 So I go thru this weird thing before traveling for any length of time...
I am really quite a worry-er by my nature and coupled with my incredible ability to catastrophize anything into the worst case scenario, it allows me to be in a constant state of
"get my affairs in order" mode.
Today it manifested in my cleaning out the cupboard under my sink.
How this helps me "get my affairs in order" is not for me to understand, I am simply following that innate urge to clean up messes so that in case I die on this trip, no one will find out just how much of a slob I really was.
Brilliant huh?!
I found all sorts of things I had been looking for...
I go thru moods of wanting to learn how to properly put on makeup, style my hair or moisturize my skin regularly. In the wake of these moods I am left with a lot of "product", evidenced today with a bag of giveaway to my niece who can play dress up and can put on fancy lotions or something...
Past all the sparkle and play I found...
What I wasn't expecting, little boxes shoved into the back corner of the cupboard.
Empty but still present.
I found five, FIVE, empty pregnancy test boxes.
All empty, all with just the instruction booklets in them, but stacked carefully in the far back corner of the space.
I sat there looking at them next to the empty tampon boxes, wondering why I kept empty boxes...why didn't I just toss them into the recycle bin with the other empty boxes?
I guess, I simply wasn't ready to.
I peed on a lot of sticks in these last 8ish years, far more then the 5 boxes that I unearthed today.
Then with just as much anxiety, and heart pounding as I had experienced buying them, I broke them down and put them into the recycle bin, brochures and all.
after that I found a reason to leave the house; I couldn't bear to hear The Barreness's cackling laughter and blinding smile
Posted by The B at 4:00 PM 4 comments: Links to this post

My current work schedule has me away from the studio and working my other job.
It happens every year about this time.
I am simply needed far more at my other job and I don't mind.
Except this year I prepared for it.
Artistically speaking
It meant I worked like crazy for three months and submitted work to as many places as I could.
I was writing checks like a drunk sailor
...well if sailors carried checkbooks and wrote checks is still to be debated...
but I went crazy!
I submitted to more places and events then I ever have,
and kept saying yes to everything that passed close enough to me to grab a chance at.
The result is AMAZING!!!
I have gotten my work into many more places, and in fact my call to the universe was heard (thank goodness) and I got into a show that had over 200 submissions and only 37 accepted artists. The piece I got into this exhibition is a piece from my infertility project !
In fact when the email arrived, I saw the subject line on my phone and refused to read the email until I was behind an actual computer....this of course made hubby laugh at my "rituals" and waited for me to read the actual email on the screen. The result was me laughing hysterically for close to 15minutes at my met goal.
He in turn was crying from pure joy of witnessing me meet this goal and the result of meeting this goal is that we are traveling to see the opening reception.
It just happens to be in IRELAND
Posted by The B at 1:35 PM 5 comments: Links to this post

It is that time of year!
Waiting in long lines to buy groceries, snide comments from customer service people, rude people driving cars, temper tantrums, and holiday music looped in an endless cycle on speakers of shops.
I do love this time of year, but it also carries the daily reminders of a family not made.
So I was sitting watching my company-keeper(TV) last night. I was watching "how I met your mother" and one of the characters finds out she was not only not-pregnant (pregnancy scare, in a woman who says thru the series that she doesn't want kids) but that she CAN'T have kids.
This information has her sliding into an abyss of reality of a life faced without children.
Her doctor asks if she can talk to a friend about it, but she knows how they all will react. Currently her best friend is pregnant and would be an emotional mess and needing comfort instead of comforting. That friends hubby would shower her with questions and possible fixes. then the remaining friends would try and fix her sadness with comfort food or hi jinks. So instead, when pushed by them to find out what is wrong, she says she is too tall to be a pole vaulter. He friends of course, all break into her described reactions.
She is telling this story to what appears to be her future kids, but in the end, they are actually imaginary.
She is left sitting on a bench in a park on Christmas crying at the fact that her choice has been taken from her. That although she never saw kids in her future, it was a choice she was making not one that was made for her.
She ends her monologue with although she was never a mother, she was:
a successful journalist, world traveler, business woman and aunt.
Telling the audience that she indeed was still a whole person even without being a mother.
It was a well played/written reality of our sisterhood.
I personally have been meandering around a lot of this everyday emotion.
The Barreness is knocking at the door into me as of late; she is dead set to get in...she might even shimmy open a window if need be. I am trying to hold her back with wit and a sunny disposition.
I don't know how long it will hold....
I have made a new friend and she is now pregnant, I am thrilled for her (deeply and truly) but now can barely contact her anymore.
I have another friend who just picked up the ashes of her son, a man the same age as me, who lost his battle to addiction.
I have another friend who just had to have a hysterectomy because of the same issues I live with.
I have another who has now gone into early menopause because her ovaries shut down and has lost her sex drive completely!
I watch my hubby struggle daily with witnessing others parent. He often looks at me when his eyes are welled up with tears. Like the mere sight of me will make the tears go away.
We met family last week, a trip that meant us driving 1300miles in
four days. It was a lot of driving and a little visiting.
We did this last year too...we have promised each other that next year we are staying put.
Because we are a family of two, we are often looked over, invited last, told we can drive farther, and expected to be overly flexible because we don't "have to deal with kids".... *sigh*
it hurts too much to ignore any longer.
There has been a lot of wonderful happening too...
but for today I needed to unload the heavy emotion I have been bathing in.
I am feeling very very mortal and it scares me.
Posted by The B at 10:06 AM 4 comments: Links to this post