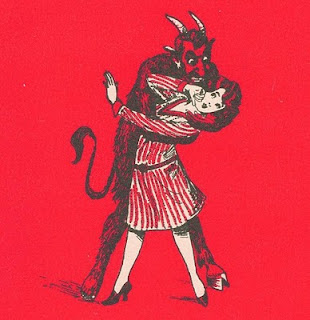 She plays coy....but we know her strength
First off I would like to thank the people who are now following my blog.
I have written here for years and in the last 6months I have been "discovered"....in fact the first time I realized I had "followers" I sat and stared at the screen and cried. I am not totally sure why. I think it was a combination of feeling found out, and feeling found.
So thank you ladies for your OVERWHELMINGLY kind words and love.
I do so feel it.
Yesterday was a stop at the NP, I wanted to talk about my plans, and desires for my body.
My primary care doc chose not to call to followup on the results of my MRI from December so I took control and booked an appt with the NP who treats me like a person and hears what I say.
So long crappy primary care doc...and thanks for nothing
When she came in I told her that I wanted to go over my latest results and find out what it really meant. She moved her chair all the way over to me and went thru each of the four lines of findings slowly.
I pointed out that the cyst had shrunk between the ultrasound and the MRI (one week apart) and she mentioned that it might have ruptured a little after the ultrasound.
She also thinks that the "plucking" feeling I have is most likely Mittleschmerz or middle pain, the feeling of ovulation.
I told her I had not gone back onto the BC pills since I saw her last in Aug (for a stressed tummy) and that although she prescribed them to me, it took months to fill it and then pick it up from the pharmacy.
It now resides in the cabinet of my bathroom....forgotten most of the time.
I told her the emotion of having to go back on them was too heavy.
I wanted to avoid them for as long as possible. I felt better off of them.
Seeing that I was still doing nothing to shrink the fibroids or the cysts, I was aware I was at risk for torsion and wanted to assess the real facts involved in making this decision.
I also told her I have been fed so many scare speeches, that if she could please simply tell me if I am acting risky. No need to stand in front of a dragon if I don't have to.
After a cyst gets about 3cm she likes to keep a close eye on it. Mine are around that size but I am feeling fine. She said she would prefer to treat me, then the cyst...if I feel fine, then we just keep an eye on the cyst and not go on the pill. I get to have ultrasounds every 4-6months instead.
She told me the warning signs of fallopian tube torsion and I understand the risk.
She told me to that I need to take vitamins and that we will assess my needs as they appear, she will do my annual and we will work together to keep me feeling good!
and that my penchant for chai or green tea is not a caffeine risk.
I felt like a person when I left, I felt normal and ok...I was so empowered that I came home and took a nap!
I awoke from a dream about two weeks ago telling my husband that I have just slain the devil...I slid a sword down its back. It fit into its spine like a sheath, it was not a triumphant feeling, but simply something I knew I could do.
He told me I was a bad-ass, and was glad I was sleeping next to him.
Posted by The B at 12:14 PM 2 comments: Links to this post 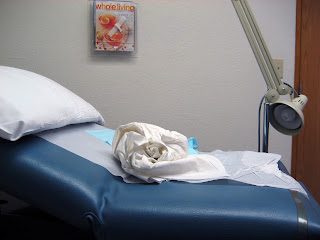 decisions and choices
Posted by The B at 4:34 PM 2 comments: Links to this post

I was calmly walking up and down the fully loaded aisles this afternoon on a break from work.
Well, in between having to make a deposit at the bank and return to a pile of invoices.
I was shopping at my favorite Asian Market this afternoon,
I have known the family since I was 13. Their market moved in next door to our little restaurant way back when and after all my travels in Asia, I have made their shop a monthly ritual for stocking up on long loved items that the grocery store just doesn't have.
I went to high school with the families daughters and we have always been friendly with one another.
Today I was lost in pottery and figuring out which packages of soba noodles I wanted.
I was the only one in store, besides one of the daughters who was running the register.
( they are twins and I have never been able to tell them apart...I don't hang out enough with them to hear a nuisance in a voice or see a difference in a mannerism)
Anyways, I am lost in noodles when I hear her say
" You never had kids, huh"
I slowly looked up and said..."we tried for a long time, but it just never happened."
She told me that she is hearing a lot of people tell her recently, and she wondered what was happening.
I casually said, maybe it was all the processed food we were raised on or something.
She said "Yeah, I mean our parents clearly didn't have the same problem"
I am aware of the difference in cultures and the manner and ease that a serious topic can be addressed so casually and this came to mind as I tried to loose myself again in the aisle of bulk spices.
When I finished finding a new variety of miso and loading my basket with bulgar and the like, I took it to the register. We looked and each other and I found myself compelled to complete the thought that she had started.
" We have tried for close to 6 years now and it just doesn't happen"
her response
" Do you know who's fault it is? "
then a voice that was so calm and sure came from my mouth, before I even realized that I had responded
" it is no ones fault. We simply can not stay pregnant"
She said she had seen a science show about infertility and that a woman was talking about miscarriage and that she had lost four pregnancies before deciding that it was too much to bear emotionally and she adopted instead.
I looked at her and said, "yes, it is a horrible experience."
He brother-in-law entered the store with a sleeping baby in a carrier and quickly whisked it off to the back of the shop.
I watched him with my eyes and she looked and me and said, that her nephew takes his nap in back with her parents watching over him.
I paid for my stuff and she said, your brother has kids right? I said yep, I have three nephews and a niece.
At that I wished her a great day and to say hello to her parents for me.
I got into the car and buckled myself in, I decided The Barreness can take care of herself.
Posted by The B at 9:14 PM 2 comments: Links to this post

I am still on a slippery slope...but feel I am at least moving upwards.
At dinner last night I was feeling lighter then I have been in a few days and then something brought up the topic of acne....and my hubby said " you know the article about accutane " my head stopped and I dipped back below the surface.
I was just 11 or 12 when the dermatologist wanted to start me on the trials of this drug...being 12 I was afraid of needles (the drug required regular blood work while taking it) so I waited until I was 17 to take it. I had HORRIBLE cystic acne, I was on antibiotics for years for it, as well as all sorts of topical creams and dealt with invasive procedures all in hopes to reduce my acne. This acne had already wiped away all my self-esteem and still has it lasting effects to this day with me trusting people.
I was teased horribly for YEARS as an elementary kid, jr high kid and then high schooler.
I had one friend, and she was considered the fat girl that no one talked to.
I also had braces and glasses...so my image of myself was not a bright one.
I was the stereotype they had in movies.
At 16/17 I finally had had enough and went on the drug, it worked great but after the first round was over my acne came back again...I was told "this only happens in 3% of the cases" well meet miss 3%
so I went on another round and that knocked it all away.
My boyfriend at the time was also on it and we would get our blood work done at the same time,
romantic I know.
So after last nights reminder, I was shot back to being a little kid and my bullies telling me to put my head in a bag as "you are not worth looking at"  that bullies name was James. I remember you.
I wonder if I would have made different choices if I had known that I was possibly taking away my chance to become a mother.
Posted by The B at 1:25 PM 1 comment: Links to this post 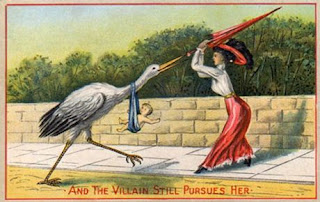 Posted by The B at 1:53 PM No comments: Links to this post 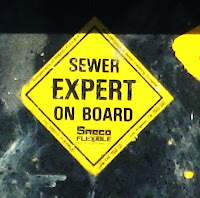 I am currently fighting a case of the blues.
Well, I don't really fight them anymore really. I simply let it come and be...I have found that my past methods of brushing them aside simply piles it all up into a corner and then then tumbles down onto me later when I am feeling like myself and under control.
*
Maybe it is the new years arrival, maybe it is the presence of birth control pills in my house.
The birth announcements, or the season.
Maybe it is something else.
*
Regardless, I am sad and am trying to figure out why
*
I am wanting to turn my life upside down again, like a strong shake will make the last pieces fall into place or something. I go thru these phases of wanting to cut my hair, wear different clothes, become a different person.
These usually fade away with a few baths and I remember that I have not won the lottery so my plans to run away and join the circus are not really do-able yet.
I actually use to practice balancing acts as a child in case the circus needed someone
(but that is another story)

Until I can figure this latest round out, I am quiet, moody and weepy.
Posted by The B at 2:58 PM 4 comments: Links to this post