Once a year I reveal who I am...the rest of the time I am simply The Barreness

In honor of National Infertility Awareness Week:
I revealed myself...and now I am in the shadows for another year.

Open Love Letter from The Barren

As a total surprise to me, hubby wrote an open love letter to me for my birthday.
It was so unexpected, so deeply moving and honest that it took me to my knees.
I will share it here with you:

" I hope it's not too boastful to say I'm the luckiest man on this wall. Other walls have lucky men and women, i'm quite sure, but if you've landed here to celebrate The Barreness's 42nd orbit around the sun, I'm here to say I win. The amazing thing about The Barreness is that she's got enough awesome to make sure all of us win too! (just not quite as much as me)

She is gentle and kind-hearted with everyone (...except drivers on cell phones, these she curses and gestures at wildly...it is kind of scary); she is generous and giving with a casualness that belies the focused consideration she has for those around her; she has an infectious smile that she hides too often; she is honest, and wears her heart on her sleeve even when she knows it might get hurt; and she has a wellspring of creative talent that constantly surprises.

There are more personal aspects of her awesomeness, of course. She's beautiful, and she's got mad sexiness (rawr!). She can calm the crazy in my head with a simple hug. She's the perfect source of stinging criticisms that I know are true (I can't seem to listen to myself for some reason). Her eyes give credence to the saying that they are the windows to the soul.

I feel so lucky to have known her these last 20 years, to have grown up with her, to have tackled the many difficulties in life together that would have been so much harder to face without her. For these reasons, I feel like I've won...I feel like all of us have won (just not as much as me).

Clearly I have won the jackpot,
found the pot of gold,
went over the rainbow
and eaten the last piece of the award winning pie

My birthday wish is that each of you find this kind of love in life:
in a person,
in a passion,
in a hope.
Posted by The B at 3:21 PM 7 comments: Links to this post

It is my birthday


It is my birthday, smack dab in the middle of NIAW...
I use to feel miffed that it fell on "secretary's day" but
I think being reminded of being infertile all week might trump it.

Anyways, there has been enough thick emotional sludge to drag myself through in these last two weeks that I decided that yesterday was the perfect day to start the party.
I sat and had a pity party yesterday afternoon...and then by the early evening I had blown off
enough sorrow to re-focus on some art and my submission to "the way I see it" exhibit over at
The Ladies In Waiting Bookclub site.

I arrived at work this morning, convinced it would be just another day, and my little brother surprised
me and had gotten up early and made me cookies.
They were even warm when he haded them to me.
I am feeling very loved

May this be the start of a wonderful birthday week!
(after the age of 30 you get to celebrate your birthday for a longer time each year,
didn't you know that? )

Happy Birthday to me
Posted by The B at 9:55 AM 8 comments: Links to this post 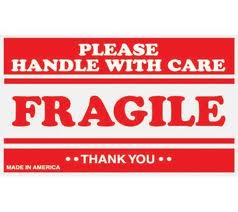 I was rushing off to the ER again yesterday to meet my parents. My mother was in pain once again and her bladder was not letting her sleep; making her go to the bathroom every 15minutes.
As I was racing into town, I sent a text message to a friend
" mom back in ER, I am off to meet her there"
Within a moment, I got a response
" do you need help"
this caused me to cry....not only was the response immediate, but it was an offer from the heart.
I responded
" I might need an ear to listen later"
immediately followed with a
" I am here for you"
I felt comforted...and not alone in my journey back into the dark of emotion.

Last week when my mother was in a sleep deprivation state of delusion (she hadn't slept in 4 days and was given an anti anxiety drug to help her sleep; but all it did was agitate her further) she started directing her anger at me.
My father was not allowed in the room (she didn't want to see him) and so heartbroken,
he sat all day in the waiting area.
My mother was convinced that we had put her away.
I had disappointed her terribly and that "you don't know what it means to give motherly love"
(that was the mildest of her thinking about me)
after being berated for over two hours I finally called in my brother.
text read:
" I need your help, mom is convinced we have put her away"
My brother arrived and repeated the words I had been saying to her for hours:

No you can not go home yet, you are not healthy enough to go home
Don't pull on your catheter
Your oxygen needs to be in your nose
You can not stand up, your legs are weak from being in bed for four days

She heard him, and aside from removing the batteries from her heart monitor
she behaved herself for him and her nurses.
She refused to make eye contact with me,
and when she finally fell asleep at 5pm on the 4th day, she slept for 8.5 hours.

I spent the night in the hospital (dad was not allowed in the room still and my brother needed to get back to work), so they wouldn't restain her;
I feared when she came to from her sleep she would feak out she was restained
and I got her cathater removed so she " had no strings"

I stayed awake all night.
Watching her and making sure she was safe

When sleeping beauty awoke from her first slumber, she was confused but remembered that she had said some really mean things to me, and started to cry.
I held it together, just barely...

She thought she was in a mental health ward, I told her she was in the hospital

She had a lot of gray areas, and I was happy to answer any questions she had.

I stayed until my father arrived and they were kissing and my dad was proposing to her again.

Then I drove home and took a nap.
I was shaking for most of that day.

Yesterday when the ER call came, I went into "figure it all out" mode again.
I left the house this time and set up a catch-net for myself.
I cried on the way there, and by the time I arrived I was together and able to listen to what doctors said, what my mother wanted and what my father needed.
Consoling my father and advising my mother

When I arrived home at the end of the day Hubby made me a HUGE bowl of Mac and Cheese
and I sat in my PJ's staring at the wall for a while.

When I finally said something I said: "we are all so fragile"

This was my everything since Friday afternoon: 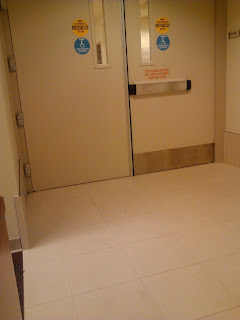 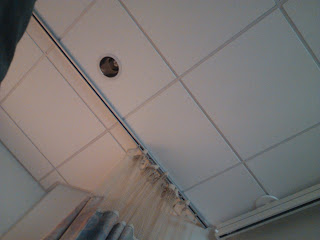 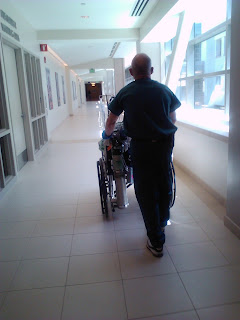 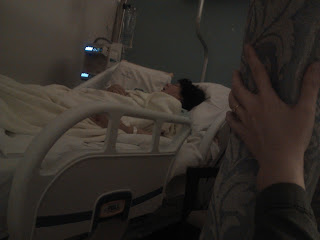 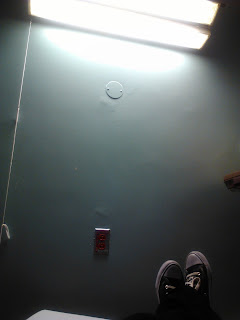 My mother was rushed to the ER on Friday and it was discovered that she had a kidney infection that had gone septic, completely dehydrated and dropped her blood pressure to deathly levels.
She is home now
I am speechless today.
Posted by The B at 9:31 AM 5 comments: Links to this post

Call for artists and creative peeps!! 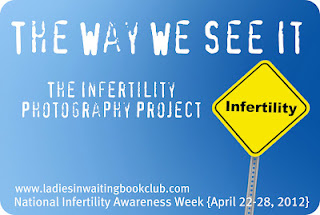 For detail and entry info click: HERE
Posted by The B at 7:53 AM No comments: Links to this post

Thankful Thursday-
Remembering to keep believing, in yourself and others
Posted by The B at 2:46 PM 1 comment: Links to this post

It is Friday!
I have been in the studio and in the office all week and I really don't have any real thoughts.
I am in a good mood and making things again, so that my mind has less ammunition to attack me with.
I thought I would post a pic of my cat...well one of them.
I have two that I live with
(if you are a cat person you understand that he shares his home with you, not the other way around)
No I am not a crazy cat lady, and as Nicole points out: nor is my cat a kid replacement...
he is a great companion that serves as a company keeper, mood enhancer and bed warmer.
His thoughts today: 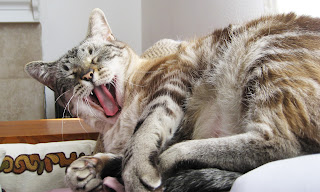 Tonight is the first night of Passover, and my parents home will be filled with all the family that makes me the least comfortable.
There is a group of comfortable family and a group of family that makes me feel judged...
tonight is a night of judges. ugh
I hope that this weekend will counterbalance tonight and be filled with more studio time and a bright and quiet Easter on Sunday.
I wish you all
A Happy Easter and a merry Passover
Posted by The B at 11:13 AM 3 comments: Links to this post