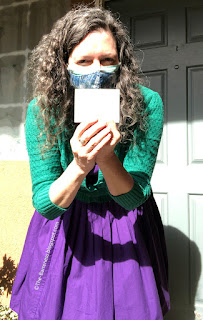 1st shot done!
Yes, I dressed for the event
I have spent the last two and a half weeks helping The Barren with his reaction to the first dose of the vaccine. The Barren gets an asthma response when he gets a chest cold, which is why we locked down so hard and for so long...well The Barren got his fist dose of the vaccine and 36hours later began to wheeze, it has spiraled since and he is currently on an inhaler, allergy medications and antibiotics to fight what is believed to be the beginning of pneumonia.
(all these things have happened in the past when he has gotten chest colds, too many weekend walk in clinic experiences to count)
Yesterday he was wheezing so badly that we went to a walk in clinic because the wait to see his doctor was two weeks... he had to be seen in an outside room because it all looks like Covid-19 and we don't need to freak people out.
We live in a funky part of town, so while waiting in our outside room, we got to witness a near beatdown between two guys who had "looked at each other too long" and wanted to knock/knife the daylights out of each other. thankfully that didn't manifest.
The doctor yesterday explained that an anaphylaxis response is not uncommon for people with asthma and that his body probably reacted big to the first round and sent it all spinning.
Steroids were added to the menu of pills and the hope is that he will get breathing better in time for the second dose...which has been booked at a four week mark instead of the 3week mark.
The Barren is breathing better so far, thank goodness.
As you can imagine, the upcoming shot has us both on edge and wanting to be battle ready!
This morning I got my first dose of the vaccine, I got the Dolly Parton one.
Now all her songs are stuck in my head.
I dressed up for the shot, wearing a dress I wore the last time we went out in 2020. I also firmly believe that nothing can go wrong if you are wearing a purple piece of clothing. I use to have a pair of grape purple pants, I wore when I wanted to feel assured and strong. So I wore a grape purple dress and bright green sweater this morning...I felt present and brave.
The vaccine site looked like a set from M*A*S*H as it was an office building under renovations, so it was covered in plastic sheeting, bare cement floors and drywall partitions with folding chairs. 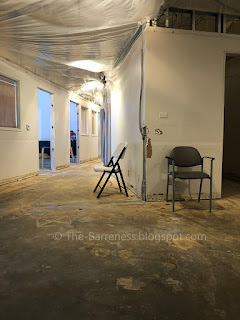 It was surreal to say the least.
Got my shot and appointment for the second dose.
I took my photo and then tried to not cry.
I have already taken a nap and I am famished.
I should be fully covered by my fathers birthday and I can finally hug them!!
Something I think is pretty emotional.
Parents are currently fully vaccinated and that has me breathing easier for them and realizing that my relationship has shifted once again.
I had gotten a call last week that my mother went to the clinic because her eye was BLEEDING! and she only went because my brother said it would be a good idea.
She hesitated and when my father sent a photo of her eye I nearly collapsed. I told my mother that she could loose vision and that she should really get an opinion other than her own...she blew me off and at that moment I pondered:
Were my parents always so defiant?
Was it time to step in or was it really time to step back?
I chose to step back.
My mother went to see an eye doctor the following day and they confirmed that nothing was damaged or injured (thank goddess) and that was that.
I waited for them to call me
my step back meant I was not going to call them anymore (at least I was going to try)
and when they wanted to talk to me I would answer that call and do my best to not stir the pot.
It took three days for them to call me.
(Prior to the virus I spoke to my parents at least twice a day, now it is once every few days.)
This is a BIG adjustment for me; as I see them wanting to chat as acceptance and love. So when it is sluggish it means they are not thinking of me or love me.
It is sick, and insecurity is running the show but, a reality I am working with.
The reality of not being quarantined is a scary one, being around more than two people is scary.
The yoga studio sent out a poll asking if a pre-covid level class filled with fully vaccinated people was something of interest....
I made an appointment to get my hair cut after I am fully vaccinated, I have not been able to get it cut since August of 2019.
Then today the State announced that it plans to be fully open by June!
That scares me too...I am scared of people now it seems.
I am scared that life will mow this all over and forget about what is possible,
I am scared that things will slingshot back to business as usual...and forget all that is important.
I am scared more often than I am confident.
I need to work on that too...
but, the idea of a thrift store visit is really exciting too and there are people there?!

So glad that you got your first shot. But very sorry for The Barren. Hope his second dose is easier to deal with, and that by now he is breathing easily.

Yay to fully vaccinated parents. Boo to parents not having the judgement to go to the dr when her eye is bleeding! I know the question though - I wondered about my FIL. Did he always have bad judgement but it never affected me until the last few years, or was his age removing his ability to apply good judgement? Step in or step back. It's really hard. And in my experience, parents often resist the "stepping in" at the outset, because they don't recognise that they have any cognitive decline/need help. Good luck.

Maybe they don't call you simply because it has become a habit not to call you every day? (And there was no urgency to do so.)

Insecurity is really hard, I know. I'll reference my post a week or two ago - accurate thinking is important. Sending hugs.

Your purple dress is awesome!! And I love your green sweater. That's it. You inspired me. I will be wearing purple to receive my second dose. Oh yeah, now I remember that I wore a soft purple t-shirt for my first dose. Yay!

I am so sorry The Barren had such a reaction. I am very glad he is feeling better. Maybe his system will be more accustomed to things and the second shot won't be as bad. (See how good I am at making things up? It helps. Except when it doesn't, haha.)

I'm scared of the next phase too. I feel like we are still receiving so much conflicting information. I try to remind myself to take things one day at a time, one moment at a time. Maybe we will know more definitive facts soon. 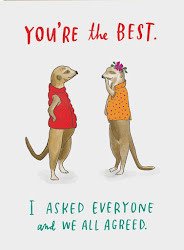